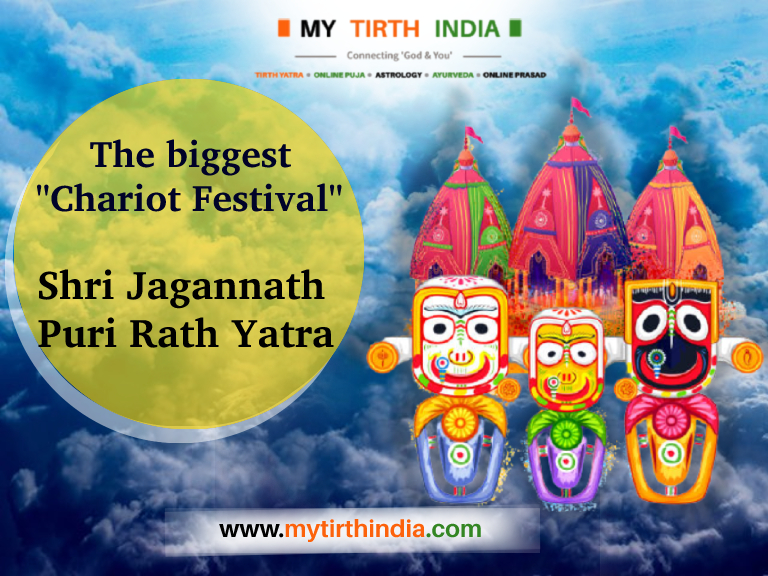 The Jagannath Puri Rath Yatra, the ‘Festival Of Chariots, is a joyous occasion of the Hindus who are devoted to ‘Lord Jagannath’ – The Supreme God. It is also known as Gundicha Yatra, Ghosa Yatra, Dasavatara Yatra and Navadina Yatra. The annual occasion is held at Puri, situated in Odisha, India. Every year on the second day of Shukla Paksha (the waxing cycle of the moon) of Ashadha Masha (the third month in the Odia calendar), people gather around to celebrate it.

Description Of The Grand Festival:

The world-famous Jagannath Rath Yatra celebrates Lord Jagannath’s yearly visit to Gundicha Temple. This is through Mausi Maa Temple (Motherly Aunt’s home), which is located near Saradha Bali in Puri.

During this festival, the three presiding deities in the Jagannath Temple– Lord Jagannath, Lord Balabhadra and Goddess Subhadra, and Sudarshana Chakra, are brought out of the temple ceremonial parade and placed in their respective marvelous chariots. Millions of devotees then draw these chariots.

The grand chariots- Nandighosa, Taladhwaja, and Darpadalana, are built beautifully every year using wood of certain trees- dhausa, phassi, and many more. These chariots are purchased from the ex-princely state of Dasapalla. An exclusive group of carpenters buys them.

As followed for centuries, the three chariots stand on the Bada Danda, the Grand Avenue, and are decorated according to their particular scheme.

Destination Of The Chariots:

The glorious chariots travel to the Gundicha temple, located nearly two miles towards the North direction. While being on their way, Nandighosa (Lord Jagannath’s chariot) stops by the cremation area of a Muslim Devout, Bhakta Salabega, to pay respect.

While returning from the Gundicha Temple, the three chariots also stop by Mausi Maa Temple to pay their tribute. The deities are then offered the delicious Poda Pitha, a unique kind of pancake known to be the Lord’s favorite. After staying for a week, these chariots drawback the deities to their home. This brings an end to the glorious Rath Yatra.

The Ratha Yatra, known as the ‘Festival of Chariots’, is considered one of India’s most joyous and glorious festivals. This grand festival includes pulling three chariots (Nandighosa, Taladhwaja, and Darpadalana) with three presiding deities (Lord Jagannath, Lord Balabhadra, and Goddess Subhadra) by devotees to Gundicha temple.

This year, the Rath Yatra 2021 is to be held on 12th July 2021. However, it is scheduled to occur annually on the second day of Ashadha month (late June or early July).

The annual Ratha Yatra is known to be among the most sought-after occasions to its devotees held in India. According to the people of India, there is no other parade as magnificent and eminent as this yearly Yatra. This glorious festival held every year holds great significance in the heart of devotees.

Devotees have a deep, religious desire to pull the ropes of the chariots carrying the Lords. This is because they believe that one who gets the opportunity to remove the ropes of the chariot gets all their sins erased by the Lord himself. It is considered lucky by all devotees to get a glance of the deities presiding in the chariots. This is because one glimpse of the Lords grants the blessing of a hundred horse sacrifices. In the previous times, this opportunity was made available only to the kings. Another fantastic fact regarding this festival is that even Non-Hindus and foreigners are permitted to visit the Gundicha temple and receive their blessings during this time of the year.

The prestigious Jagannath Rath Yatra is considered amongst the prominent and hugely celebrated festivals among everyone across the world. All the devotees, even the non-Hindus and foreigners, come together to attend this joyous occasion. This is because it is believed that even a glimpse of the mighty Lords is enough to attain the boon of a hundred horse sacrificed. It is also thought that the pulling of ropes of this chariot allows you to destroy all the sins one has ever committed during their entire lifetime.

This magnificent celebration of at least ten days is enough to make everyone’s minds and hearts come to a peaceful alignment. Anyone who wishes to observe the grand Rath Yatra should do it at least once in their lifetime to attain peace of mind and paramount joy. We promise; you are bound to forget all your worries here when you engage in its serene hospitality and celebrations. So, why keep waiting? Plan for it now. Rathyatra is around the corner.