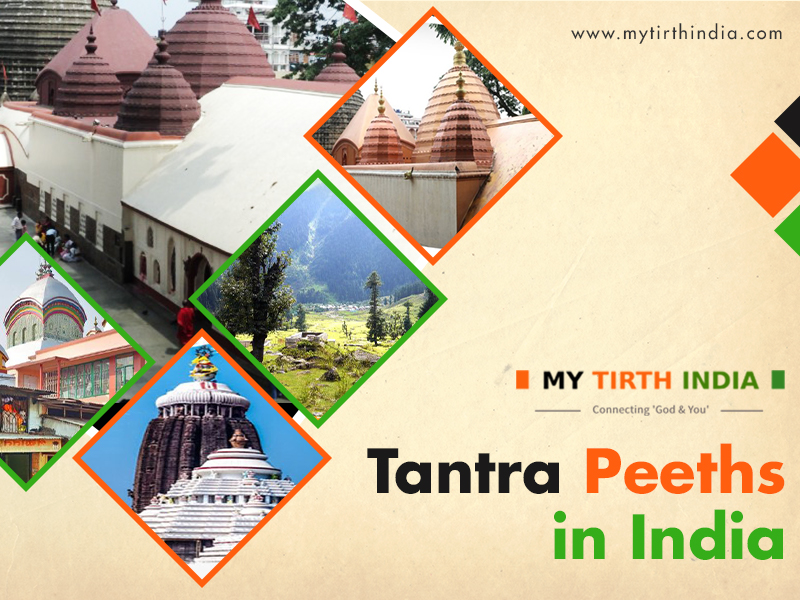 Goddess Sati is considered to be the feminine divinity of Hinduism. Mata Sati who is also known as Goddess Shakti is the creative force of the universe. Not only the Sanatan Hindus of India but also the Hindus all over the world celebrate the power of Shakti through a myriad of Hindu festivals.

India is a home to the divine Shakti Peeths, which are also known as the sacred Tantra Peeths. These sites are much revered Hindu shrines where it is believed that Goddess Sati’s body parts fell while Lord Shiva mourned and carried her body.

In this blog today, we are going to share the supremely sacred Shakti Peeths of India. These holy sites are also known as the Shakti Peeths or the Tantra Peeths in India.

What are the popular Tatra Peeths in India?

This is not only one of the most popular pilgrimage destinations in India, but also a very popular Tantra Peeth in India as well. It is believed that this is the place where the throat of Goddess Sati fell while Lord Shiva mourned her demise. The temple of Amarnath is a highly sacred and spiritual place for the Hindus. Every year thousands of Sanatan Hindu devotees take part in the Amarnath Yatra tour as a holy tirtha yatra.

The place is located near Pahalgam in Anantnag district. You have to remember that the temple is open for darshan during the July and August months where the Shivling is available for darshan. You will find the idol incarnated in the form of Shakti Mahamaya along with Trisandhyashwar as Bhairav. Opt for the Amarnath yatra tour package to visit this Tantra Peeth in India.

This is a highly regarded holy Temple in Kolkata and also a prominently-worshipped Tantra Peeth in India. It is believed that this is the place where the right toes of Goddess Sati fell. The Goddess resides in this place in the form of Shakti Kalika. The Kalighat Temple in Kolkata is a Hindu Temple which is dedicated to Goddess Kali. Some people believe that the name of the city Kolkata is derived from Kalighat which was a very popular ghat residing in the course of the Adi Ganga (Hoogly River).

Over a period of time, the river drifted away from the temple. At present, the temple is now on the banks of a small canal originating from the Adi Ganga. This is one of the most important of the 51 Shakti Peeths in India. Kalighat is also associated with the worship of Goddess Kali who is a Rudra avatar of Goddess Shakti. To visit this Tantra Peeth in India, you can opt for the Kalighat darshan tour package.

Goddess Kamakhya is believed to be one of the fiercest incarnations of Goddess Shakti. This is the place where the yoni or vagina of Goddess Sati fell. The place is located in the hills of Neelgiri, Guwahati, Assam. This is a highly popular Tantra Peeth in India. During the months of June/July, the menstrual course of Goddess Sati takes place for three days.

During these days, the doors of the temple remain closed. The pandits of the temple use a piece of cloth, which is also known as Angabastra to cover the yoni-stone of the Devi. The temple is one of the four most predominant and divine Tantra Peeths in India. Thus, if you want to visit this place, you can use the Kamakhya Darshan tour package.

This is the celestial Shakti Peeth which is located just a few minutes away from the Kashi Vishwanath Temple. It is the place where the lower teeth of Goddess Shakti fell. Located in Varanasi, Uttar Pradesh, this holy Tantra Peeth in India is dedicated to Maa Varahi. You will find the architecture of the temple artistic and elegant because the stones used in the construction of this temple is unique. These stones shine in the sunlight. The temple remains closed throughout the whole day and is open for only two hours in the morning. You can use the Varanasi-Ayodhya tour package to visit this astonishing temple.

Chandrabhaga Shakti Peeth is also known as the Prabhas Shakti Peeth. This is one of the most important temples among the Hindus. It is located very close to the magnificent Somnath Temple in Gujrat. At present, this Tantra Peeth in India is at the backside of the Ram Mandir near the Harihar Forest. The stomach of Goddess Sati fell in the Prabhas Kshetra near the Somnath Temple. This is the place where Devi remains in the form of Chandrabhaga. You can choose the Dwarka Somnath tirth package to visit this Tantra Peeth.

The Vishalakshi Shakti Peeth is located in the Manikarnika Ghat in Varanasi, Uttar Pradesh. It’s the place where the earrings of Goddess Sati fell. Goddess Sati is worshipped here in the form of Devi Vishalakshi and Manikarni. This exquisite temple is also known as the Vishalakshi Gauri Temple. In this place, Lord Shiva is worshipped in the incarnation of Kaal Bhairava. If you are planning to visit this historical place in India, then you can opt for the Varanasi tour package from My Tirth India. This is also a historical location because of the legendary leader Queen Manikarnika.

The Vrindavan Shakti Peeth is also popularly known as the Bhooteshwar Temple in Mathura, Uttar Pradesh. This is a very popular Tantra Peeth in India where Goddess Sati’s ringlets of hair fell here. In this place, the Goddess Sati is worshipped in the form of Devi Uma. Mathura is one of the holiest cities in India. Thus, if you are planning for a pilgrimage trip to this Tantra Peeth, then you can use the Mathura Vrindavan tour package.

Finally, the Puri Jagannath Temple in Orissa is also another Tantra Peeth in India. We all know that Puri is a prime pilgrimage site for the Hindus. It is also famous for the Rath Yatra held in the month of Sravana. Inside the Jagannath Temple, you will also find the Vimala Temple. This is a Shakti Peeth and one of the most important ones among the 52 Shakti Peeths. The foot of Mata Sati fell here and it is worshipped even now.

To visit this pious d Tantra Peeth in India, you can opt for the Puri Jagannath Darshan Package.