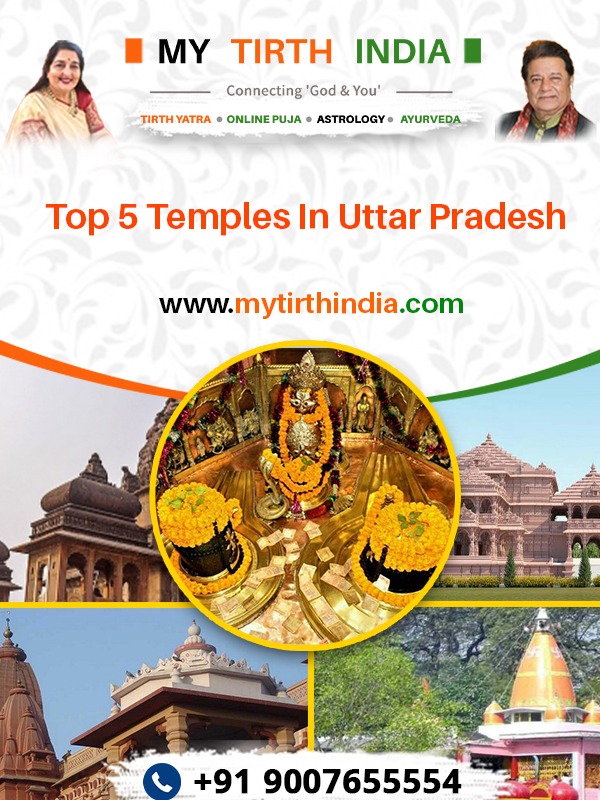 Uttar Pradesh is one of the most popular pilgrimage destinations in India and also one of the largest states with many temples. The Top 5 Temples in Uttar Pradesh are Shri Krishna Janmabhoomi Temple, Ram Janmabhoomi Temple, Kashi Vishwanath Temple, Vindyavasini Temple &Chandrika Devi temple. Uttar Pradesh has been the cradle of our civilization, comprising divine spirituality that has been slowly accumulated throughout the millenniums. It is quite fitting that devotees from around the world come to visit Uttar Pradesh to seek spiritual intervention. Uttar Pradesh is popular for its special attraction, especially for the Sanatan Hindu devotees. Mainly because it is the birthplace of two avatars of Lord Vishnu. One is Lord Ram and the other is Lord Krishna.

Apart from that, Varanasi is one of the oldest surviving cities in the world and it holds a special space in the hearts of the devotees of Lord Shiva. You will find that the most popular temple in Uttar Pradesh is the Prem Mandir and it is visited by thousands of devotees every single day. Yes, it is true that there are a lot of attractions to check out in Uttar Pradesh. However, a trip to Uttar Pradesh is not complete if you don’t visit the majestic temples. The beautiful temples with extraordinary architecture, the clings of temple bells, the intoxicating fragrances will make you feel the true heaven on earth.

In the following section of the blog, we are going to share the top 5 best temples in Uttar Pradesh. Rest assured, a trip to Uttar Pradesh is simply unforgettable.

Here are the top 5 temples in Uttar Pradesh

There is no denying the fact that the Krishna Janmabhoomi Temple is one of the most important pilgrimage destinations in the religious history of the Hindus. The primary reason is, this temple is exactly where Lord Krishna was born. Mathura, which is the birth city of Lord Krishna, is on the banks of the river Yamuna. It is 145 kilometers from Delhi.

The city of Mathura is one of the most sacred cities to the Hindus because it hosts the highly revered temple of Krishna Janma Bhoomi Mandir. The temple is the place where Lord Krishna was born thousands of years ago. Apart from the temple, you can also visit the neighboring towns of Govardhan, Nandgaon, and Vrindavan. To experience the majestic Krishna Janma Bhoomi Temple, you can opt for the Mathura Vrindavan tour package from My Tirth India.

Ayodhya is known as the birthplace of Lord Ram and there is also a specific place in Ram Kot where he was born. It is believed that this was the place where gods reigned on earth thousands of years ago. Lord Ram, who is also the seventh incarnation of Lord Vishnu, was born there and he ruled his kingdom from this town.

Also, it is believed that the city was built by the gods. There is a small temple where Lord Ram was born and it is known as the Ram Janmabhoomi Temple. This place is highly regarded and a sacred place for the Sanatan Hindus and Vaishnavites. To experience the beauty of Ayodhya, you can opt for our Varanasi Ayodhya Vidyanchal tour package.

The Kashi Vishwanath Temple is one of the best and most popular sacred temples in India. It is located in Varanasi which is one of the oldest cities and a highly pious pilgrimage site for the Sanatan Hindus. The temple is dedicated to Lord Shiva and is visited by thousands of devotees every year who come to offer their prayers. This is a Jyotirlinga site where Lord Shiva is enshrined in the form of Vishwanath of Visheshwara.

It is believed that Varanasi is the place from where the Jyotirlinga of Lord Shiva flared towards heaven after it broke up from the earth’s crust. The one who worships Lord Vishwanath attains peace, happiness, and liberation from the chakra of rebirth. The Kashi Vishwanath Temple is one of the most salient temples in India and is considered highly reverent from the time of Upanishads and Puranas.

The Kashi Vishwanath Temple is mentioned in the Puranas as Kashi Kanda of the Skanda Purana. There is a small well in the temple which is popularly known as the Jnana Vapi, also known as the “well of wisdom”. When you visit the Kashi Vishwanath Temple at Varanasi, you cannot miss out on the aarti. Five different aartis are performed in the temple at five different times in the day.

To visit the Kashi Vishwanath Temple, you can opt for the Varanasi tour package.

When it comes to the top most important temples in Uttar Pradesh, you cannot miss out on the Vindyachal Temple, which is also known as the Vindyavasini Temple. The temple is located 8 kilometers away from Mirzapur on the bank of the River Ganges. Since the temple is located on the Vindhya mountain range, that is why it is known as the Vindyachal Temple. It is one of the holiest shakipeeths and it is believed that the trio of Goddess Kali, Goddess Durga, and Goddess Saraswati resides in the Vindyavasini temple.

Present in the outskirts of Lucknow, the Chandrika Devi Temple is one of the oldest temples. It is built on the banks of the Gomti River. Therefore, you will experience a serene and soothing environment throughout the temple complex. A mesmerizing atmosphere prevails throughout the Chandrika Devi Temple. The temple is dedicated to Goddess Chandi and it is believed to be constructed thousands of years ago by the elder son of Lord Lakshman.

At present, the temple is a divine spot for numerous devotees who come to enjoy the spiritual aura and offer their prayers to Goddess Chandi. When you visit the Chandrika Devi Temple, you can opt for our Lucknow tour packages. Apart from the Chandrika Devi temple, you can also visit the Chakrateertha where Lord Brahma Manav Chakra struck planet earth. It is a kund or bathing place in the shape of Chakra revered by the Sanatan Hindus.

These are the top 5 best temples in Uttar Pradesh. Uttar Pradesh is blessed with a lot of extraordinary temples that encapsulate the true essence of spirituality. Every temple of Uttar Pradesh has a history and the state is nothing less than a spiritual magnet for Hindu devotees, learners.