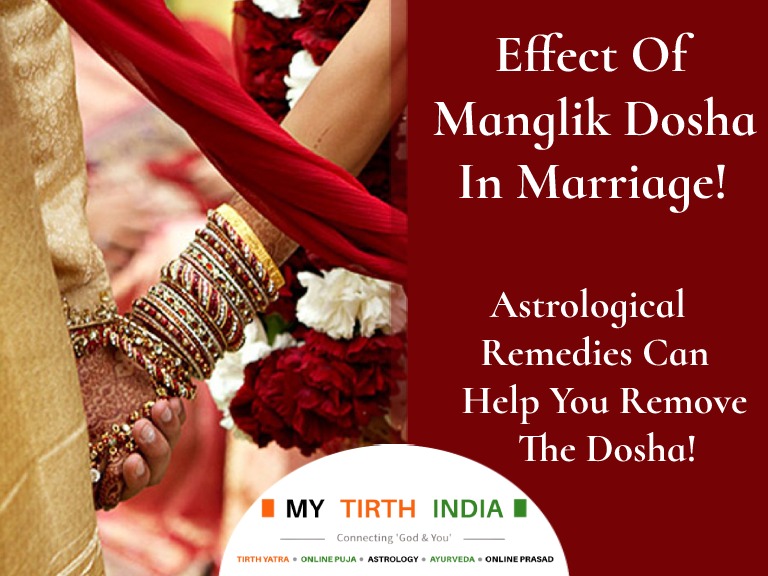 Effect Of Manglik Dosha In Marriage! Astrological Remedies Can Help You Remove The Dosha!

Manglik Dosha in marriage, more commonly known as Mangala Dosha, is an astrological belief among the Hindus. According to Astrology for marriage, it is the most well-known Dosha, affecting both men and women. A Manglik refers to the person born under the planet Mars (referred to as Mangal in Vedic Astrology).

A Manglik is more likely to suffer from misfortune and detained marriage. They are highly unlikely to have a steady wedding because of their unreliable, violent and argumentative nature. According to Astrologers, Mars is the most hostile planet, and therefore, its nature is contemplated as Manglik.

Causes Of Manglik / Mangal Dosha: How Does It happen:

This Dosha mainly occurs when Mars is present in the 1st, 2nd, 4th, 7th, 8th, and 12th houses of the person’s horoscope. Mars can also become malicious if placed with other inauspicious and ill-omened planets. As Mars is a raging planet that symbolizes egotism, unpredictable rage, and arrogance, all these traits are inherited by a Manglik. If Mars becomes the ruling planet in Manglik’s horoscope, they will be more likely to be selfish and ill-tempered. Due to this reason, the Manglik will find it very difficult to comprise with his/her non-Manglik partner, leading to unstable relationships.

Effect Of Manglik Dosha In Marriage:

There are diverse effects on this Dosha based on the various placement of Mars in other houses. So, check for Manglik Dosha here.

According to Astrology for marriage, the first house is known to be the “House Of Spouse.” Thus, when a non-Manglik gets married to a Manglik, useless disputes are likely to arise. Sometimes, this may also lead to physical assault and violence. This will gradually lead to unnecessary tension and distress, proving to be a barrier in their marriage.

When Mars is mighty in the second house, more conflicts will grow steadily. This will lead to damage in the person’s married as well as professional life. The lives of their family are also adversely affected.

When Mars is active and hostile in the fourth house, difficulties are likely to arise professionally. These issues will gradually leave the person discontented with his professional work, causing him to switch jobs repeatedly. Such a situation will automatically result in money troubles.

When this situation occurs, the person will be so full of negative energy and temper that they will disagree to maintain a healthy relationship with their family members. They will continue to be highly controlling and dictating over his/her spouse.

The presence of Mars in the Eighth house will make the person inactive and lazy. They may also continue to lose their temper out on their family members unpredictably. They are also more likely to be sexually energetic.

When Mars is situated in the Twelfth House, the person is likely to become mentally disturbed. They will often create problems while conversing with different people. Financial losses can occur too. The person often tends to suffer from various illnesses like blood diseases, hypertension, and acidity. They are likely to indulge in extra-marital affairs and can also become careless in money matters.

Some of the most effective remedies to remove this Dosha are:

Manglik Dosha is considered to be the most infamous Dosha in Vedic Astrology. This Dosha has pretty severe effects on marriage; it can even lead to divorces and second marriages. But with the help of the remedies listed above, one will be able to cancel out this Dosha in no time!